The dramatic improvement in Lambing percentages seen in the graph below has almost soley resulted from the introduction and development of Dohne Genetics at Far Valley since 1999. The Far Valley Dohne's are a very versatile, Dual Purpose animal. 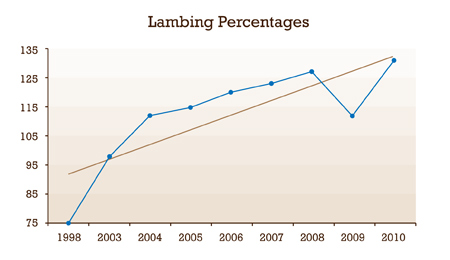 Included in the above figures are:

In late April 2005 a trial was conducted by WAMMCO in Katanning in conjunction with a number of Dohne growers to assess the suitability of the Dohne lamb for the prime lamb market. Six lines of lambs were slaughtered and the following results were obtained. As can be seen, some other trial results were offered and the Far Valley Dohnes compared very favourably against other prime lamb breeds.

His sire FV02 0289 is currently the number one ranked sire in Australia, and his dam FV02 0332, produced the three outstanding rams in the catalogue.

He will be used in a commercial flock to increase body weights and improve fertility.

Gross Margin Projection (based on actuals)

My first introduction to David Kain was a very long telephone conversation where I was enquiring about purchasing some Dohne stud ewes for our Victorian Stud. The hospitality I received from him was exceptional, we discussed many things from the transportation and care of the ewes to lambing after they arrived in Victoria. He played a very supportive role and followed up the progress as the ewes adjusted to their new environment. David is a very passionate man who doesn't just sell sheep. He sells a life long partnership in success."

After looking around we decided to go with new rams from David Kain's Far Valley stud. The result has been very successful. Despite this last year being one of the driest on record. We now have a 2% mating ratio with our Far Valley Dohne rams. This year we have our first F3 lambs. Last year the lambing was up by 10% to a mid 80's drop. This year we are hoping for better, even with the lack feed. The Far Valley boys have delivered everything we had hoped for."

We bought our first dohne rams from Far Valley in 2004. Our intention was to restore some vigour into our merino flock. Our sheep are now much plainer bodied, which has helped to lower the incidence of fleecerot, dermatitis and body strike and most importantly meant we have not mulesed a lamb for three years. With so much progress in such a short time we cant wait to see what improvements come with our progression to F4 over the next few years."

I have used Far Valley Dohne rams since 8 years ago. I have used them in contrasting environments from the far eastern wheatbelt at Southern Cross to the higher rainfall region at Arthur River in the Great Southern. The Far Valley rams come highly recommended, not only for the physical animal they produce, but because of the genetics and breeding and the meticulous detail that Far Valley principal, David Kain, puts into these animals. Longevity is one of their positive attributes."